In the words of the Lorax, by Dr. Seuss:

“Unless someone like you cares a whole awful lot, nothing is going to get better. It’s not.”

Miranda’s films have featured the efforts of others in an attempt to bring attention to some very worthwhile environmental causes. She has used the medium of film and her abilities as an accomplished public speaker to further green initiatives in her own community and the world at large. She has used the acclaim and recognition received as a platform to extend her messages to wider audiences in the hope of educating others and making a difference in our world. Along the way she has made connections with like minded individuals and friends for a lifetime. Each project has somehow fed into, or built upon another. She considers herself very fortunate to have made the acquaintance of so many amazing individuals, not just because they are the kindest and most generous people you could ever meet, but because they are the most inspiring individuals you’ll ever meet.

Her projects have often spotlighted individuals who are working on the frontlines or at the grassroot level to effect change in our habits where the environment is concerned.  Miranda understands the power of film and the importance of reaching as many people as possible to make change, but at the same time, she understands that change begins with just one person and that we can all make a difference in our own ways.

She has used opportunities at school through public speaking festivals and various other assignments to highlight subjects such as the Great Pacific Garbage Patch, saving freshwater in our world and e-waste to name but a few. Miranda always strives to encourage others to get involved by asking hard questions of her peers, family members, community and local politicians in order to have her messages heard and in order to have action taken. She has become a leader in her community and a role model for her peers and adults alike. Her campaigns have changed people’s attitudes, but more importantly, their actions. She has educated teachers, classmates, city councils and a myriad of other community leaders and politicians.

Miranda considers herself an ambassador for the earth and its many creatures. Her optimism and positive attitude are positively infectious. As one of her teachers once described her, she is an example of a kid who really really wants to do something good for the environment. Her passions, her work ethic and her meticulous attention to detail have allowed her to research projects in great depth, always being sure to capture information and perspectives as accurately as possible. She has the ability to put very complex subject matter into presentations that are both appealing and compelling to a variety of audiences. Her dedication to all things environmental is readily apparent in the lengths to which she’ll go to in order to make her messages heard and effect change.

Thanks for coming to my website. This site is meant to highlight my love for the environment, film making and art. Let me know what you think. 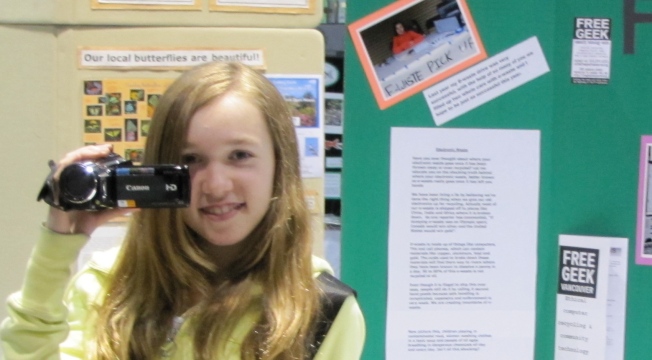