GenWhyTV and Nature Deficit Disorder. Click here to view and go just beyond the five minute mark of this episode to capture the story.

To read the entire blog written for the Nature Conservancy of Canada click here. 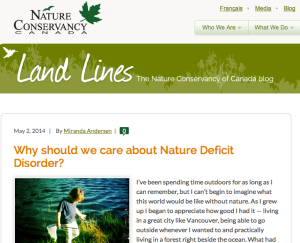 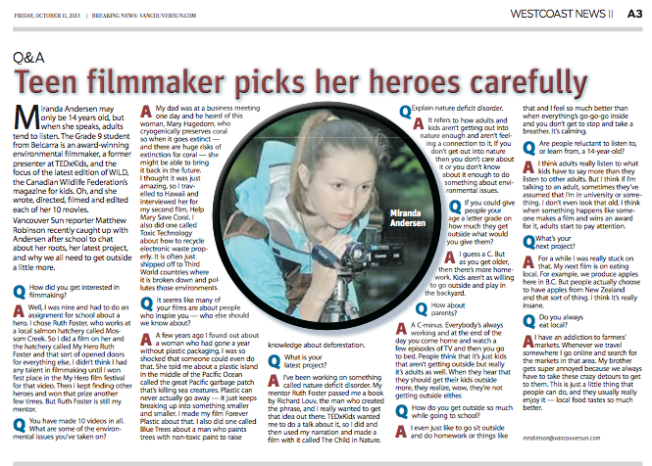 Click here to read a larger version of the Vancouver Sun article above.

Boulder, CO, September 23, 2013 – Miranda Andersen, age 14, of Belcarra, British Columbia, has been named a national winner of the 2013 Gloria Barron Prize for Young Heroes. Each year, the Barron Prize celebrates twenty-five inspiring, public-spirited young people from all across the U.S. and Canada who have made a significant positive difference to people and our planet. The top ten to fifteen winners each receive a $5,000 cash award to support their service work or higher education.

Miranda is an environmental filmmaker committed to raising people’s awareness of the need to protect the planet and challenging them to change their behavior. She has created ten films on topics such as using less plastic, disposing of e-waste ethically, and saving salmon habitats. Many of her films document environmental heroes, such as a woman committed to living a completely plastic-free life, as a way to inspire others to action. Her most recent film, The Child in Nature, focuses on the work of author Richard Louv, well-known for his book about nature deficit disorder.

Miranda writes, films, edits, and narrates her projects, and creates original guitar tracks for them. Her films have played to packed audiences at a number of festivals in the U.S. and Canada and have garnered numerous first-place awards at them. She has also organized two Earth Day e-waste collection and education events in her community and has lobbied local officials to offer safe e-waste collection services to residents. Miranda relays how she has radically changed her own consumerism and lifestyle as a result of her work, refusing to use things that aren’t good for the earth. “I want to inspire other people, especially other kids, to get involved and do their small part,” explains Miranda. “I’ve learned that there is hope for the world – lots of it – and that if everyone does their small part, change can happen.”

The Barron Prize was founded in 2001 by author T.A. Barron and was named for his mother, Gloria Barron. Each year’s twenty-five Barron Prize honorees are as diverse as their service projects. They are female and male, urban and rural, and from many races and backgrounds. Half of the honorees have focused on helping their communities and fellow human beings; half have focused on protecting the environment.

“Nothing is more inspiring than stories about heroic people who have truly made a difference to the world,” says Barron. “And we need our heroes today more than ever. Not celebrities, but heroes – people whose character can inspire us all. That is the purpose of the Gloria Barron Prize: to shine the spotlight on these amazing young people so that their stories will inspire others.”

“Top 15 Under 15” in Canadian Family Magazine 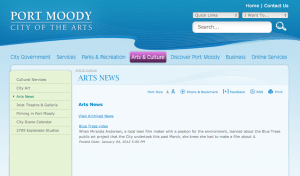 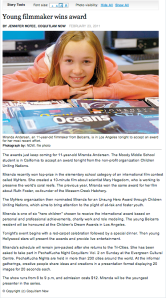 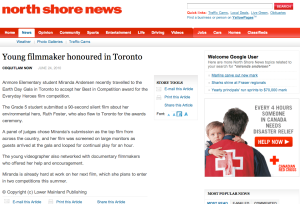