Chris Jordan is a photographer based out of Seattle but you’d never know it because he has spent so much of his time on the tiny island of Midway the last couple of years. In a previous post I mentioned how connections grow and build so much over time as people who care about similar things come across each other and they put you on to other people interested in the same things and so and so on and before you know it you’ve grown this huge community of people who become resources, supporters and inspirations.  Chris Jordan is one of my greatest inspirations. I first heard his name from Taino Uitto who was featured in my film Forever Plastic.  Chris had all these really powerful images of albatrosses from Midway Island that revealed the plastic contents of their stomaches which mothers feed their babies or adults ingest because they are colourful and look like something to eat.  There’s a huge image of one of these photos at Telus World of Science in Vancouver.

Midway was given its name because it’s midway between Asia and North America. It’s also the home to hundreds of thousands of albatrosses and so many different species of marine and bird life. It’s also close to the Great Pacific Garbage Patch and all the debris that sits in the ocean gyres in the Pacific Ocean. Chris travelled to Midway a few times each year and documented the troubles of the albatross in the form of thousands of pictures. He would often do really short videos of the birds and post them on his website. To say that these images are breathtaking would be such an understatement. They make the hairs on the back of your neck go up! 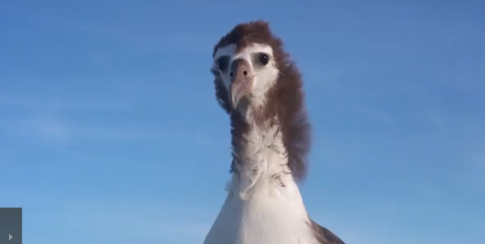 When I visited Chris over a year ago he had another visitor in his studio besides me. It was Sabine Emilliani. So maybe you’ve never heard her name before but I’ll bet you’ve heard of the movie March of the Penguins. Well, she was the editor for that film and it won an Academy Award for the Best Documentary in 2005! Anyway, her and Chris were considering co-directing a film about the albatrosses of Midway and using the thousands of images and film footage he had gathered to make a film – and that’s exactly what they did. The film premiered at TIFFS (the Toronto International Film Festival) in September – WOW!   Just listening to Chris is inspiring – seeing his photos puts inspiration on a completely different planet.

What Chris is really good at, besides taking photos, is telling a story. He uses his images to tell a story. He’s  given me advice that has helped me become a better filmmaker and I will always have his suggestions in the back of my mind when I make future films. My dream is to travel to Midway and practice what I’ve learned from him.

Midway the movie has a deeper meaning than the name of an island – and that’s because of Chris. It represents the in between place – between where we are and where we hope to be. Where the environment is concerned, Sabine sums it up well when she says,  it’s up to us to have a good ending or not.  And that good ending applies not just to the albatross but to the environment and to us.

Watch the trailer for Midway, the movie.